ESA Science & Technology - How LRLL 54361 flashes like a strobe light 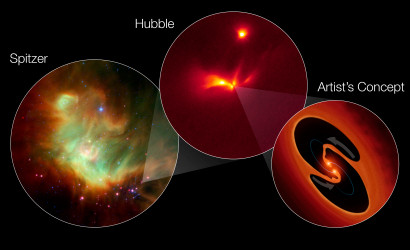 The NASA/ESA Hubble Space Telescope has made a time-lapse movie of protostar LRLL 54361 as it sends flashes of light through the surrounding nebula.

In the centre: This Hubble image resolves the detailed structure around the protostar, consisting of two cavities that are traced by light scattered off their edges above and below a dusty disk. The cavities were likely blown out of the surrounding natal envelope of dust and gas by an outflow launched near the central object.

On the right: This artist’s impression represents scientists’ theory for how and why the protostar gives off these regular flashes of light. Astronomers propose that the flashes are due to material in a circumstellar disk suddenly being dumped onto the growing stars and unleashing a blast of radiation each time the stars get close to each other in their orbit.