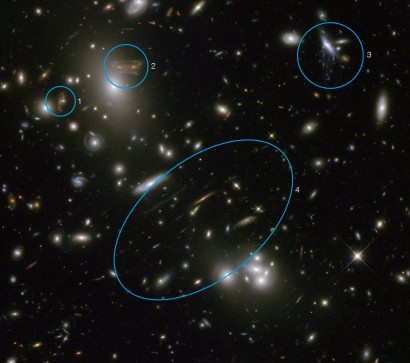 Abell 68, pictured here in infrared light, is a galaxy cluster. The effect of its gravity on light means it boosts Hubble's power, extending the telescope's ability to observe distant and faint objects. The fuzzy collection of blobs in the middle and upper left of the image is a swarm of galaxies, each with hundreds of billions of stars and vast amounts of dark matter. Distorted shapes visible throughout the field of view are distant galaxies whose light has been bent and amplified by the cluster.

1 and 2: This galaxy is visible twice, thanks to its light following two separate paths around an elliptical galaxy before reaching us. The image marked 2 is heavily distorted into the shape of an alien from the cult 1970s video game Space Invaders. The lensed galaxy lies at a redshift of around 1.6. The lensing galaxy significantly closer, at a redshift of around 0.26.

3: This galaxy appears to be melting, with purple liquid dripping from it. In fact, the purple droplets are clouds of gas being stripped out of the galaxy and heated up. This phenomenon, called ram pressure stripping, occurs when a galaxy passes through a denser patch of intergalactic gas, which strips out the gas from within the galaxy.

4: The series of long, light streaks here are background galaxies, the images of which have been heavily distorted by the lensing effects of the cluster in the foreground. These lie at a range of redshifts between around 2 and 6.