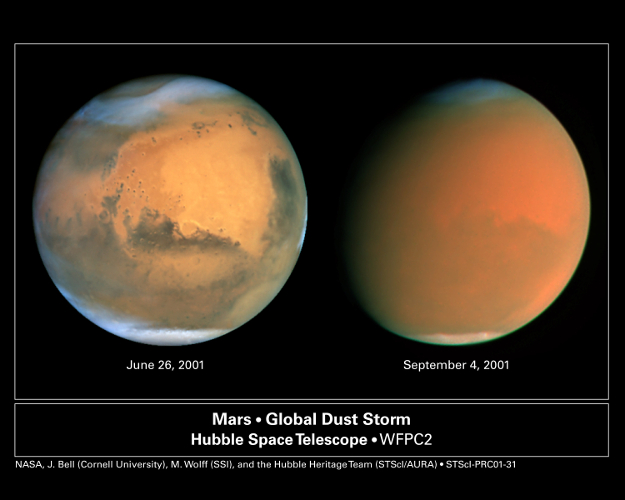 Two dramatically different faces of our Red Planet neighbour appear in these comparison images, taken in 2001, showing how a global dust storm engulfed Mars with the onset of Martian spring in the Southern Hemisphere.

When NASA's Hubble Space Telescope imaged Mars in June 2001, the seeds of the storm were caught brewing in the giant Hellas Basin (oval at 4 o'clock position on disc) and in another storm at the northern polar cap.

When Hubble photographed Mars in early September, the storm had already been raging across the planet for nearly two months obscuring all surface features. The fine airborne dust blocks a significant amount of sunlight from reaching the Martian surface. Because the airborne dust is absorbing this sunlight, it heats the upper atmosphere. Seasonal global Mars dust storms have been observed from telescopes for over a century, but this is the biggest storm ever seen in the past several decades.

Mars looks gibbous in the right photograph because is it almost 42 million km (26 million miles) farther from Earth than in the left photo (though the pictures have been scaled to the same angular size), and our viewing angle has changed. The left picture was taken when Mars was near its closest approach to Earth for 2001 (an event called opposition); at that point the disc of Mars was fully illuminated as seen from Earth because Mars was exactly opposite the Sun.

Both images are in natural colour, taken with Hubble's Wide Field Planetary Camera 2.