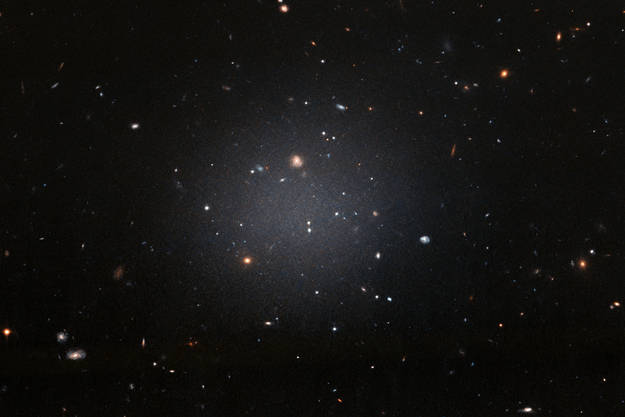 NGC 1052-DF2 resides about 65 million light-years away in the NGC 1052 Group, which is dominated by a massive elliptical galaxy called NGC 1052.

This large, fuzzy-looking galaxy is so diffuse that astronomers can clearly see distant galaxies behind it. This ghostly galaxy is not well-formed. It does not look like a typical spiral galaxy, but it does not look like an elliptical galaxy either. Based on the colours of its globular clusters, the galaxy is about 10 billion years old. However, even the globular clusters are strange: they are twice as large as typical groups of stars.

All of these oddities pale in comparison to the weirdest aspect of this galaxy: NGC 1052-DF2 is missing most, if not all, of its dark matter. The galaxy contains only a tiny fraction of dark matter that astronomers would expect for a galaxy this size. But how it formed is a complete mystery.

Hubble took this image on 16 November 2017 using its Advanced Camera for Surveys.