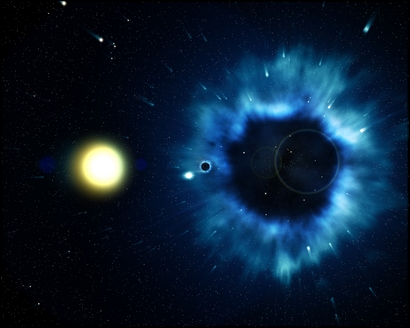 This artist's impression shows a black hole and its yellow companion star being sent out on a out on a long journey through the Milky Way galaxy by the explosive kick of a supernova - one of the Universe's most titanic events. New observations made by the ESA/NASA Hubble Space Telescope have allowed astronomers to measure the motion of this black-hole system across the sky using images taken in 1995 and 2001. The results are surprising: the black hole streaks across the plane of our Milky Way at a velocity 4 times that of stars around it! This is the first direct link between black holes and the supernovae that create them.
View »
8-Feb-2023 05:01 UT