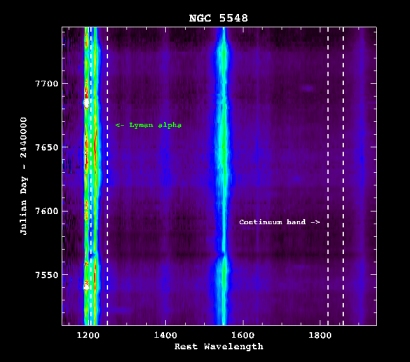 NGC 5548 has been repeatedly observed with IUE.  The figure shows the evolution of the IUE SWP spectra of NGC 5548 taken in the period December 1988 to September 1989, when it was observed regularly every four days. The vertical axis represents time (in Julian day - 2 440 000) and the horizontal axis gives the wavelength, increasing to the right (1150 to 1950 Å).

In this image it is possible to see the correlated variations of the slightly redshifted Lyman alpha and CIV emission lines.