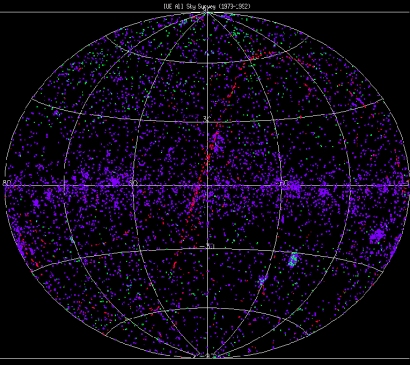 IUE all-sky survey (by object type) of all the images taken between 1978-1992 by IUE with the SWP (circa 1000 to 2000 Ångström) and LWP/R (circa 2000 to 3000 Ångström) cameras. This is an Aitoff projection of the positions of more than 80 000 images (about 8000 unique positions are visible) plotted in galactic coordinates. The galactic and ecliptic planes are easily detectable along with other galactic features as well as the Small and Large Magellanic Clouds.

Observed objects have been distinguished by IUE object class: