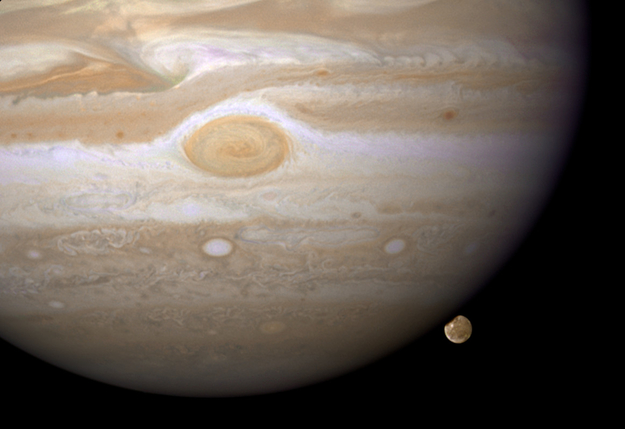 The NASA/ESA Hubble Space Telescope has caught Jupiter's moon Ganymede playing a game of "peek-a-boo." In this crisp Hubble image, Ganymede is seen just before it ducks behind the giant planet.

Ganymede completes an orbit around Jupiter every seven days. Because Ganymede's orbit is tilted nearly edge-on to Earth, it routinely can be seen passing in front of and disappearing behind its giant host, only to reemerge later.

Hubble's view is so sharp that astronomers can see features on Ganymede's surface, most notably the white impact crater, Tros, and its system of rays, bright streaks of material blasted from the crater.

The image also shows Jupiter's Great Red Spot, the large eye-shaped feature at upper left. A storm the size of two Earths, the Great Red Spot has been raging for more than 300 years. Hubble's sharp view of the gas giant planet also reveals the texture of the clouds in the Jovian atmosphere as well as various other storms and vortices.

Astronomers use these images to study Jupiter's upper atmosphere. As Ganymede passes behind the giant planet, it reflects sunlight, which then passes through Jupiter's atmosphere. Imprinted on that light is information about the gas giant's atmosphere, which yields clues about the properties of Jupiter's high-altitude haze above the cloud tops.

This colour image was made from three images taken on 9 April 2007, with the Wide Field Planetary Camera 2 in red, green, and blue filters. The image shows Jupiter and Ganymede in close to natural colours.