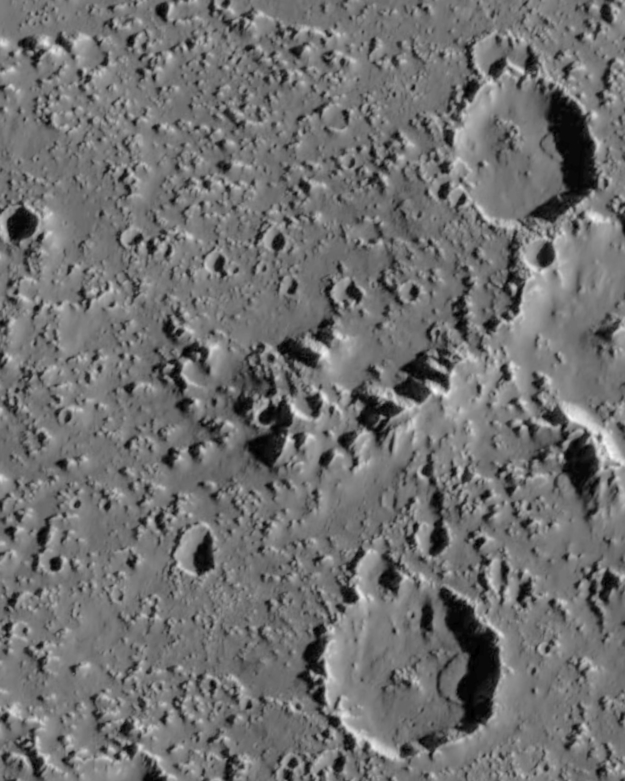 Recent Galileo images of the surface of Jupiter's moon Callisto have revealed large landslide deposits within two large impact craters seen in the right side of this image. The two landslides are about 3 to 3.5 km in length. They occurred when material from the crater wall failed under the influence of gravity, perhaps aided by seismic disturbances from nearby impacts. These deposits are interesting because they travelled several kilometres from the crater wall in the absence of an atmosphere or other fluids which might have lubricated the flow. This could indicate that the surface material on Callisto is very fine-grained, and perhaps is being "fluffed" by electrostatic forces which allowed the landslide debris to flow extended distances in the absence of an atmosphere.

This image was acquired on 16 September 1997 by the Solid State Imaging (CCD) system on NASA's Galileo spacecraft, during the spacecraft's tenth orbit around Jupiter. North is to the top of the image, with the Sun illuminating the scene from the right. The centre of this image is located near 25.3 degrees north latitude, 141.3 degrees west longitude. The image, which is 55 km by 44 km across, was acquired at a resolution of 100 m per picture element.