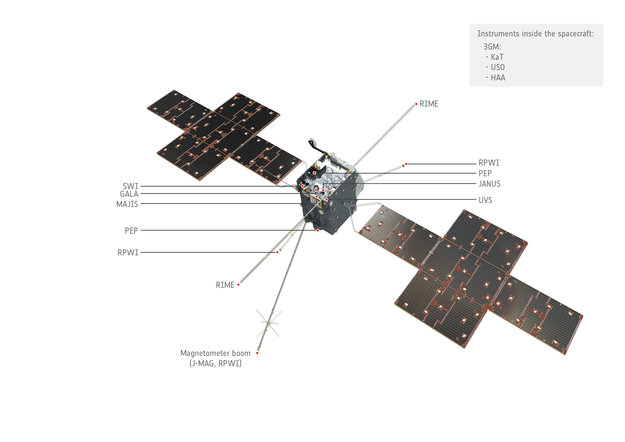 ESA's Jupiter Icy Moons Explorer, JUICE, will carry the most powerful remote sensing, geophysical, and in situ payload complement ever flown to the outer Solar System.

3GM, or the Gravity & Geophysics of Jupiter and Galilean Moons, is a radio package comprising the KaT (Ka transponder), USO (ultrastable oscillator) and HAA (High Accuracy Accelerometer). The experiment will study the gravity field at Ganymede, the extent of the internal oceans on the icy moons, and the structure of the neutral atmosphere and ionosphere of Jupiter and its moons.

GALA, the GAnymede Laser Altimeter will study the tidal deformation of Ganymede and the topography of the surfaces of the icy moons

JANUS, an optical camera system, will study global, regional and local features and processes on the moon, as well as map the clouds of Jupiter. It will have a resolution up to 2.4 m on Ganymede and about 10 km at Jupiter.

J-MAG is the JUICE magnetometer; it is equipped with sensors to characterise the Jovian magnetic field and its interaction with that of Ganymede, and to study the subsurface oceans of the icy moons.

MAJIS is the Moons and Jupiter Imaging Spectrometer. It will observe cloud features and atmospheric constituents on Jupiter, and will characterise ices and minerals on the icy moon surfaces.

PEP is the Particle Environment Package. It comprises a package of sensors to characterise the plasma environment of the Jupiter system.

RIME, the Radar for Icy Moons Exploration, is an ice-penetrating radar to study the subsurface structure of the icy moons down to a depth of around nine kilometres.

RPWI, the Radio and Plasma Wave Investigation, will characterise the radio emission and plasma environment of Jupiter and its icy moons using a suite of sensors and probes.

SWI, the Sub-millimeter Wave Instrument, will investigate the temperature structure, composition and dynamics of Jupiter's atmosphere, and the exospheres and surfaces of the icy moons.

The mission will also carry out a Planetary Radio Interferometer & Doppler Experiment (PRIDE), which will use the standard telecommunication system of the spacecraft, together with radio telescopes on Earth to perform precise measurements of the spacecraft position and velocity to investigate the gravity fields of Jupiter and the icy moons.