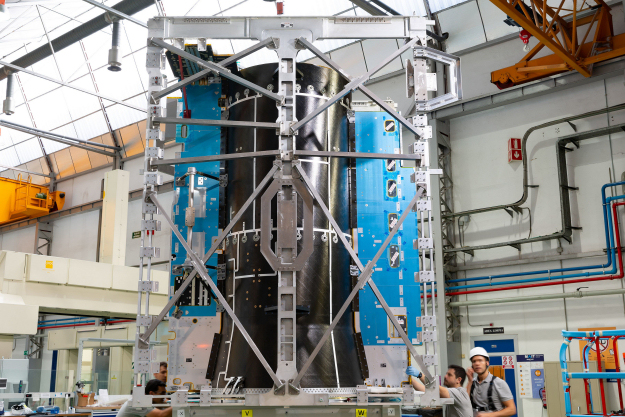 The inner structure, or Structure, Shielding and Thermal control Subsystem (SSTS), of ESA's JUICE – JUpiter ICy moons Explorer – mission. The photo was taken at the Madrid-Barajas site of Airbus Defence and Space on 19 July 2019.

The JUICE SSTS is made in carbon fibre and is composed of the central load-carrying cylinder, shear panels, two equipment-protecting vaults, the thermal control system – includes a heat pipe network and multilayer insulation – and secondary elements such as 13 additive manufacturing brackets. This key element of JUICE weighs 580 kg and will support the spacecraft's weight of 5300 kg (including about 3000 kg of chemical propellant).

JUICE is the first large-class mission in ESA's Cosmic Vision 2015-2025 programme. It will complete a unique tour of the Jupiter system that will include in-depth studies of three potentially ocean-bearing satellites, Ganymede, Europa and Callisto, carrying the most powerful scientific payload ever flown to the outer Solar System.