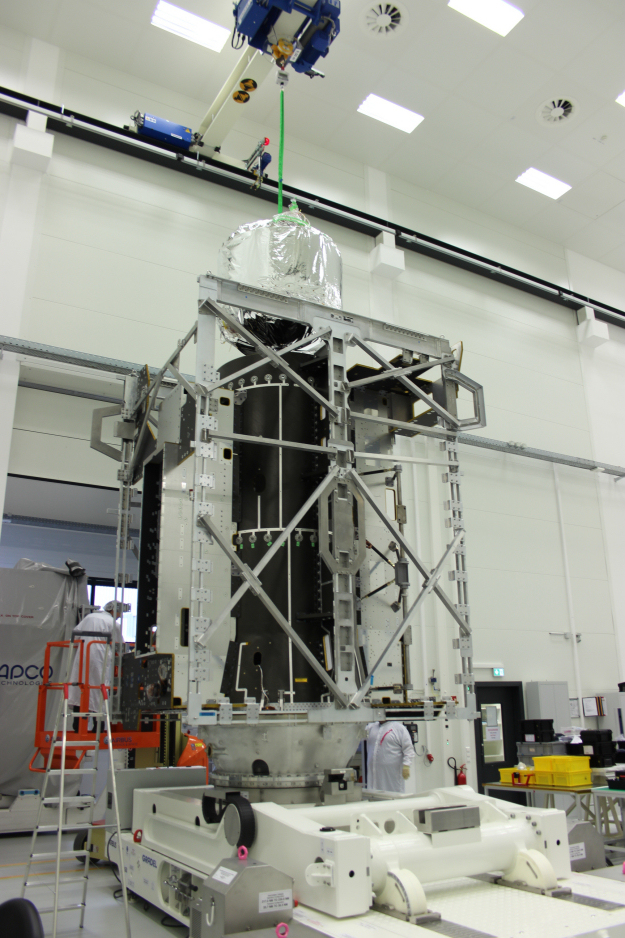 The integration of the first propellant tank of the propulsion system for ESA's JUICE mission onto the primary spacecraft structure at the Arianegroup facility in Lampoldshausen, Germany.

The first titanium tank, capable of holding 1600 litres of oxidant (mixed oxides of nitrogen, or MON), was carefully lowered inside the spacecraft's central cylinder on 7 September. The second tank, which will contain monomethyl hydrazine (MMH) fuel, is scheduled for installation at the end of October.

The tanks have been newly developed for EuroStar Neo, ESA's new generation of platforms for geostationary telecommunications satellites. JUICE will be the first space mission to actually utilise them.

The delivery of the primary structure marked the beginning of the flight model assembly, with the integration of the propulsion system that will enable the mission to reach and study Jupiter and its moons.

The integration of the spacecraft's propulsion system will, however, involve much more than installing two propellant tanks. Eventually, three fairly small tanks, each filled with helium pressurant, will be affixed around the exterior of the central cylinder, together with all the necessary plumbing. Some 130 metres of titanium piping will also have to be installed and welded in the STSS.