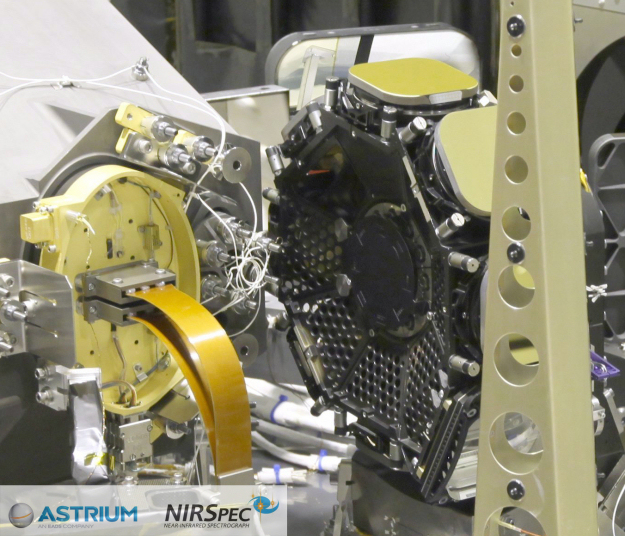 This view of JWST's Near InfraRed Spectrograph (NIRSpec) shows the grating wheel assembly (GWA) and focal plane assembly (FPA). The GWA is the black carousel with yellow squares around the edge, the FPA is the yellow circular plate with the goldish cable coming out of it.

The grating wheel holds six different gratings, one flat mirror and one double-pass prism. The gratings and the mirror are made from gold-coated Zerodur, a glass ceramic with a low coefficient of thermal expansion. The prism is made from fluorite (CaF2).

The FPA contains two closely butted sensor chip arrays - each has 2048 × 2048 pixels (of which 2040 × 2040 are sensitive to light) that can be addressed individually and read out in a non-destructive way. The small (3.144mm i.e. less than 180 detector pixels) gap between the light-sensitive portions of the two sensor chip arrays is compensated for by dithering the targets.