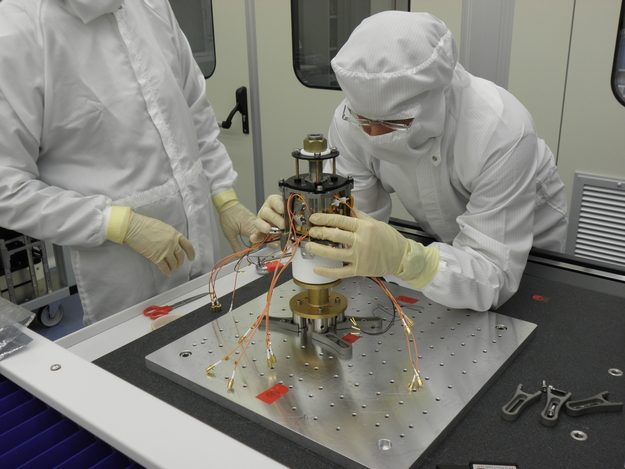 Assembly of one of the Inertial Sensor Heads for the LISA Technology Package (LTP).

The LTP, provided by European institutes and industry, is one of two payloads, or test packages, that will be carried by the LISA Pathfinder spacecraft; the other package is the Disturbance Reduction System (DRS), provided by NASA.

LISA Pathfinder is designed to test one of the key ideas behind gravitational wave detectors – that free particles follow geodesics in space-time. The mission can show this more accurately than has been done in the past by tracking two test masses nominally in freefall, using picometre resolution laser interferometry.

On the LTP, two Inertial Sensor Heads (ISH) each carry a test mass, which will be free floating once the spacecraft is on orbit. In addition, each ISH also contains:

An industrial team led by the prime contractor, Airbus DS – Stevenage, is building LISA Pathfinder. Airbus DS – Friedrichshafen is the payload architect for the LISA Technology Package (LTP). The inertial sensors, including the electrode housing, are provided by CGS (Milan).