ESA Science & Technology - If our eyes could see gravitational waves

If our eyes could see gravitational waves

If our eyes could see gravitational waves 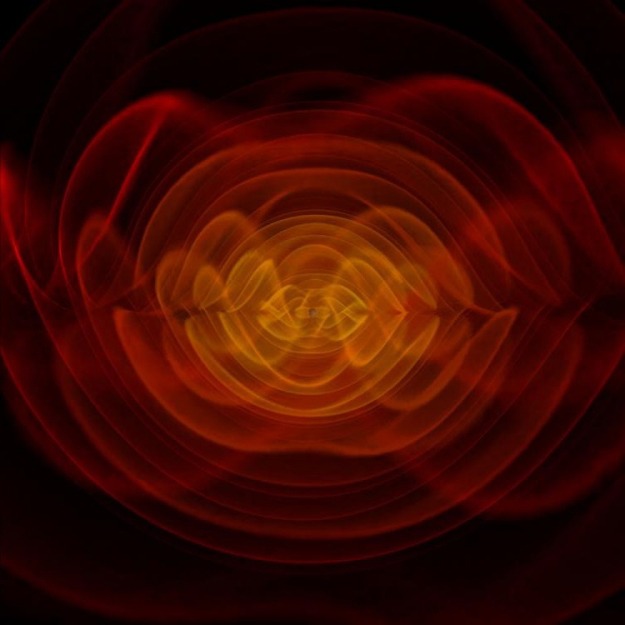 Picture the scene: two gigantic black holes, each one a good fraction of the size of our Solar System spiralling around each other. Closer and closer they draw until they touch and merge into a single, even more gigantic gravitational prison.

But what would you actually see? For such a cataclysmic event, it might all take place with remarkable stealth because black holes by their very nature emit no light at all. Rather than light, it would be a different story if our eyes could see gravitational waves.

This is what the merger of two black holes would look like. It is a computer simulation of the gravitational waves that would ripple away from the titanic collision, a bit like the ripples on a pond when a pebble drops into the water.

In the case of gravitational waves, the disturbances are not in water but in the spacetime continuum. This is the mathematical 'fabric' of space and time that Albert Einstein used to explain gravity.

Gravitational radiation has been indirectly observed but never seen directly. Its detection would open a whole new way of studying the Universe. As a result, astronomers are working on both ground-based and space-based detectors. And it is a real challenge.

Gravitational radiation is incredibly difficult to measure. The ripples cause atoms to 'bob' about to just 1 part in 1000 000 000 000 000 000 000. Building a detector to notice this is like measuring the distance from Earth to the Sun to the accuracy of the size of a hydrogen atom.

Following decades of technology development and experiments, detectors on the ground are nearing the required sensitivity. The first detections are expected in the next few years. But these detectors can see only half of the picture. The mass of the colliding black holes determines the frequency of the gravitational radiation.

The merger of small black holes, each about a few times the mass of the Sun, will create high-frequency gravitational waves that could be seen from the ground. But the giant black holes that sit at the heart of galaxies with masses of a million times that of the Sun will generate gravitational waves of much lower frequency. These cannot be detected with ground-based systems because seismic interference and other noise will overwhelm the signals. Hence, spaceborne observatories are needed.

ESA has selected the gravitational Universe as the focus for the third large mission in the Cosmic Vision plan, with a launch date of around 2034.

Unlocking the gravitational Universe will require a highly ambitious mission. In preparation, ESA will launch LISA-Pathfinder this November to test some of the essential technologies needed to build confidence in future spaceborne gravitational wave observatories.

This image is from a simulation of two black holes merging and the resulting emission of gravitational radiation, published by NASA in 2012.