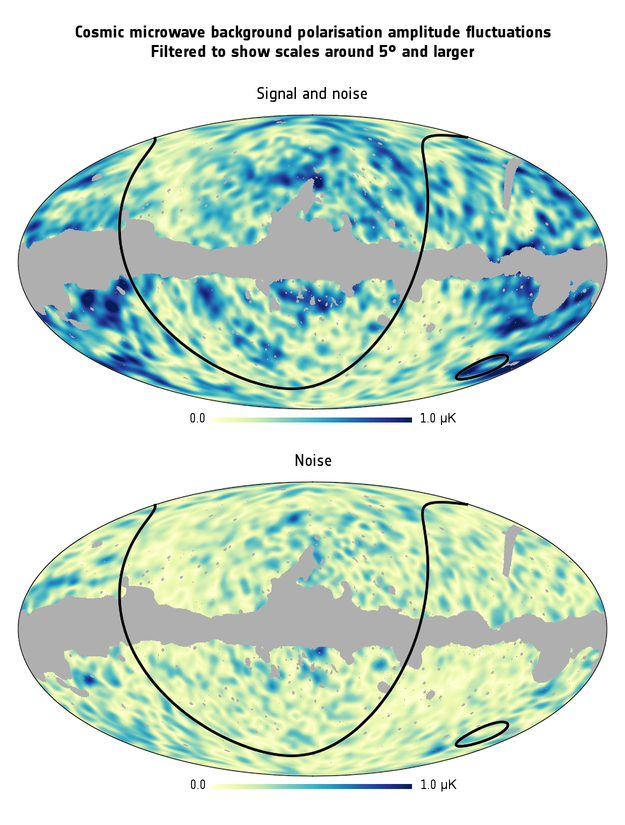 Map of the cosmic microwave background (CMB) polarization amplitude as observed by ESA's Planck satellite. While fluctuations in the CMB are present and were observed by Planck down to very small angular scales, these images have been filtered to show mostly the signal detected on fairly large scales in the sky, around 5 degrees – as a comparison, the full Moon spans about half a degree.

The most serious anomaly is a deficit in the signal observed on scales around 5 degrees, which is about ten per cent weaker than predicted. Other anomalous traits are a significant discrepancy of the signal as observed in the two opposite hemispheres of the sky (the two hemispheres are outlined by the large, roughly u-shaped curve in the image, the northern one being at the centre) and a so-called 'cold spot' – a large, low-temperature spot with an unusually steep temperature profile (the location of this spot is also outlined in the lower right).

A comparison between the top map, showing the total Planck measurement – comprising both signal and noise – with the bottom map, showing only the noise, indicates that some anomalous features may be present, such as for example a power asymmetry between the two hemispheres, but they are statistically unconvincing.