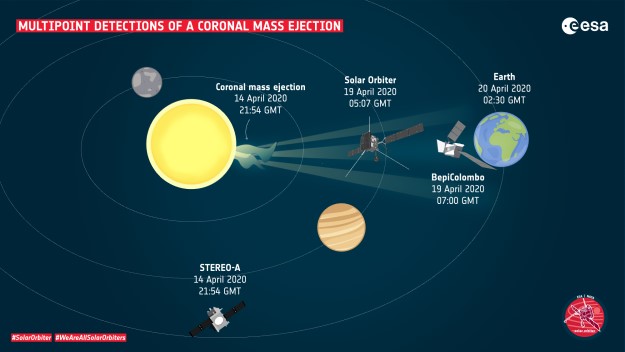 A few months after Solar Orbiter was launched in February, it measured the effects of a coronal mass ejection (CME) that came from the Sun. Similar measurements from other ESA and NASA spacecraft have allowed the evolution of the CME to be charted during its five-day passage from the Sun to the Earth.

A CME is an eruption of around a billion tonnes of particles that comes from the solar atmosphere, the corona, and travels through the solar system. CMEs are an important part of 'space weather'. The particles spark aurorae on planets with atmospheres, and can cause malfunctions in some technology. They can also be harmful to unprotected astronauts. So it is important to understand CMEs, and be able to track their progress.

The CME that Solar Orbiter detected on 19 April was not particularly large or powerful. ESA's Solar and Heliospheric Observatory (SOHO), which watches for CMEs heading for the Earth barely registered the eruption. Nevertheless, the CME effects were measured by Solar Orbiter and later by BepiColombo.

It was also seen by NASA's STEREO-A spacecraft, which is situated about ninety degrees away from the direct Sun-Earth line, and looking directly across the area of space that the CME travelled through.

With this multitude of datasets, researchers can trace the movement and evolution of the CME through time and space. It represents an example of 'multipoint solar science', which is set to become a feature of the Solar Orbiter mission as scientists correlate its measures with data from other spacecraft in the inner Solar System.