Positions of Comet Hyakutake and Ulysses on 1 May 1996

Positions of Comet Hyakutake and Ulysses on 1 May 1996 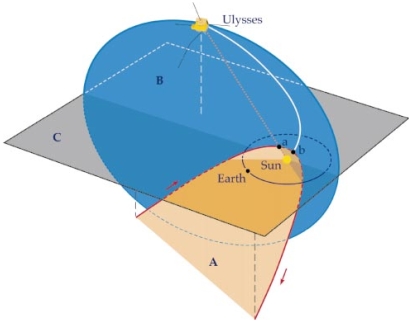 Relative positions of the Sun, comet Hyakutake, Ulysses and Earth on 1 May 1996. The orbital planes of the last three objects are labelled A, B and C, respectively.

The nucleus thus moved a considerable distance around its retrograde orbit (from a to b) while part of the tail travelled to Ulysses. The entire tail (shown in white) moved radially outwards which, combined with the comet's rapid motion, resulted in its strong curvature.

Assuming a rapid acceleration to the solar-wind velocity, it approximated an archimedean spiral in the comet's orbital plane, and measured >3.8 AU in length. Assuming the region encountered by Ulysses originated at (a) during 23 April, its radial path of 3.39 AU (dotted line) took 7.4 - 8.0 days to traverse.