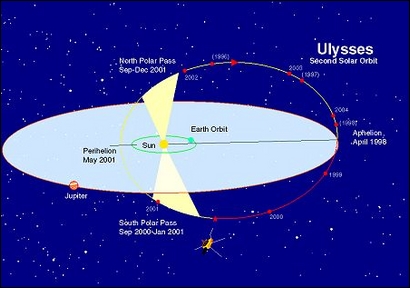 The second orbit of Ulysses around the Sun began in April 1998 when Ulysses reached aphelion (its farthest distance from the Sun). The aphelion position also corresponds to the distance of Jupiter's orbit. Note that the spacecraft's orbital period is 6.2 years, compared to 11.9 years for Jupiter. As a result there wasn't a second Jupiter flyby.

The Ulysses orbit is viewed here from a perspective of 15° above the ecliptic plane. In the diagram, the second pair of polar passes are also indicated with the yellow shaded regions.