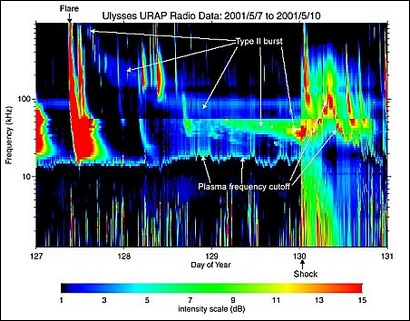 The URAP (Unified Radio and Plasma Wave Investigation) radio intensities are plotted using a colour scale (red is most intense) versus frequency and time. The type II radio burst (generated by the CME-driven shock on the way from the Sun to Ulysses, located at a distance of 1.3 astronomical units - ie 1.3 times the Sun-Earth distance) is a low-intensity feature that drifts slowly from higher to lower frequencies over a 2.5-day interval. It starts in the middle of 7 May 2001 (day 127) following the lift-off of the CME (coronal mass ejection) from the Sun and the intense radio emission associated with the accompanying flare. The type II is no longer visible after the interplanetary shock passes the spacecraft early on 10 May 2001 (day 130). Later on that day, the density rises to about 100 particles per cubic centimetre, as determined by the plasma frequency cut-off rising to ~100 kHz.