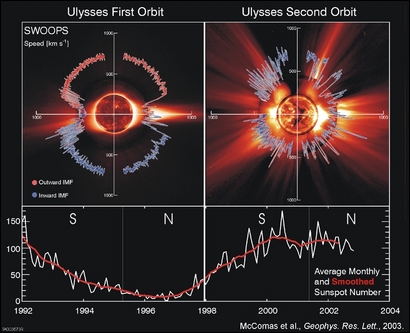 Polar plots of solar wind speed as a function of latitude for Ulysses' first two orbits. The solar wind speed data was obtained by the SWOOPS instrument (Solar Wind Observations Over the Poles of the Sun). The bottom panel shows the sunspot number over the period 1992-2003. The first orbit occurred through the solar cycle declining phase and minimum while the second orbit spanned solar maximum.

Both solar wind plots are plotted over solar images characteristic of solar minimum (17 August 1996) and maximum (7 December 2000). The solar images are composites of (from the center out): the Solar and Heliospheric Observatory (SOHO) Extreme ultraviolet Imaging Telescope (Fe XII at 195 Å), the Mauna Loa K-coronameter (700–950 nm), and the SOHO C2 Large Angle Spectrometric Coronagraph (white light).