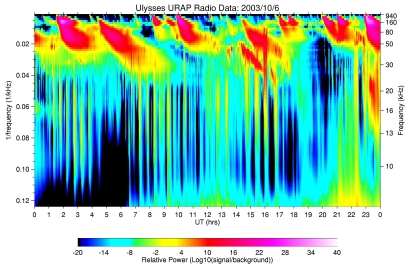 The Ulysses radio astronomy receivers detect both solar and planetary radio emissions. In this figure, showing data acquired in October 2003, the numerous drifting events at the top of the panel are solar type III radio bursts, produced by flare electrons. The other major features are quasi-periodic (QP) radio bursts from Jupiter's magnetosphere. Although the recurrence of these bursts is not yet understood, the Ulysses Jupiter flyby in 1992 showed that they were correlated with relativistic electron bursts in the Jovian magnetosphere.
View »
4-Jul-2022 12:34 UT