Measurements from the DUST Instrument

Measurements from the DUST Instrument 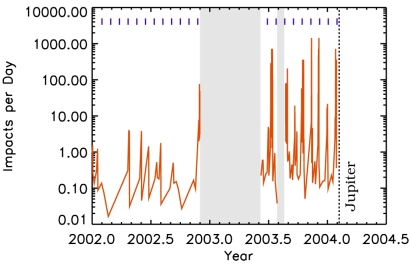 The plot shows the impact rate of small dust particles recorded by the DUST instrument on board Ulysses. The grey areas indicate periods when the instrument was switched off either for power sharing (December 2002 to May 2003) or for re-programming (August 2003). The eight strong peaks after June 2003 are Jupiter dust streams. The peak in late November 2002 is also from Jupiter, and is the most distant dust stream detected (3.3 AU from Jupiter). The blue vertical lines indicate the rotation period of the Sun.
View »
30-Jan-2023 10:29 UT

Ulysses Sweeps up Dust From Jupiter