Interstellar Flow in the Inner Heliosphere

Interstellar Flow in the Inner Heliosphere 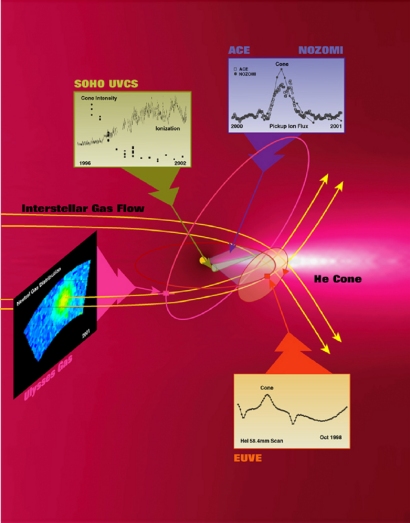 Since the late 1990's various instruments on a fleet of spacecraft have provided observations of interstellar helium in the solar system. These observations are depicted schematically here:

Coloured insert: The GAS instrument on the ESA/NASA Ulysses spacecraft collects images of the He gas flow, whose observed deflection by the Sun's gravity is translated into the flow conditions outside the heliosphere.

Yellow insert: NASA's EUVE has repeatedly scanned the focusing cone in the light of the He line at 58.4 nm as illuminated by the Sun.

Blue insert: The SWICS instrument on NASA's ACE spacecraft and on Ulysses collects He ions that are created inside the spacecraft orbit from the interstellar gas and then transported outward with the solar wind.  The blue insert shows the pickup ion flux as the Earth passed the He cone in December 2000.

Green insert: UVCS on the ESA/NASA SOHO spacecraft observes the cone intensity at 0.2 - 0.5 AU in the He 58.4 nm line, as the first coronagraph that ever observed the interstellar gas.  The green insert shows how the cone intensity decreases from 1996 (solar activity minimum) to 2000 (solar maximum) as the ionization, monitored with the CELIAS SEM sensor on SOHO, increases.

The Flow of Interstellar Helium in the Solar System