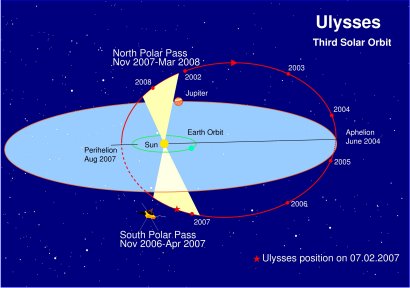 Plot of Ulysses's third solar orbit, with the orbit of the Earth and Jupiter also indicated. The regions over the Sun's poles (above 70° heliographic latitude) covered in the third set of polar passes are marked in yellow. The Ulysses orbit is viewed here from a perspective of 15° above the ecliptic plane, with the Earth and Jupiter orbits also indicated. The position of Ulysses on 7 February 2007 is given, at which time the spacecraft is at its heighest southern heliosperic latitude during the third south polar pass.
View »
1-Feb-2023 13:35 UT