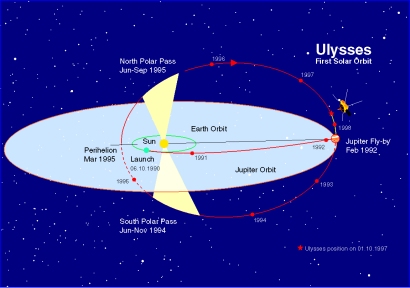 The first orbit of Ulysses around the Sun. The path of the spacecraft is shown in red. The red dots indicate the position of Ulysses at the beginning of each year. The Jupiter fly-by swung Ulysses out of the ecliptic and into a solar polar orbit. Also shown are the solar polar passes in 1994 and 1995, with the yellow shaded regions indicating the parts of the orbit where Ulysses is above 70° heliographic latitudes. The Ulysses orbit is viewed from a perspective of 15° above the ecliptic plane.