Third Ulysses Solar Orbit with Extension up to March 2009

Third Ulysses Solar Orbit with Extension up to March 2009 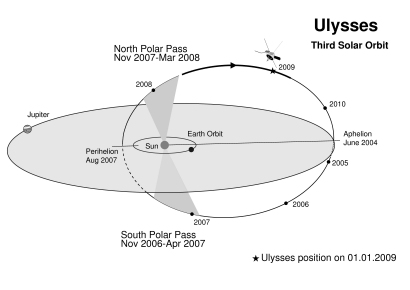 Diagram of Ulysses's third solar orbit, with the trajectory during the period covered in the latest mission extension depicted in bold (up to March 2009). The regions over the Sun's poles (above 70° heliographic latitude) covered in the third set of polar passes are also indicated. The relative positions of Ulysses, Earth and Jupiter are given for 1 January 2009.
View »
29-Jan-2023 03:36 UT