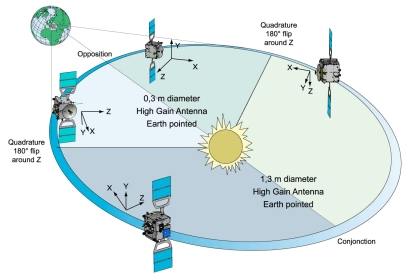 Diagram of Venus's orbit around the Sun, with the orientation of the Venus Express spacecraft during Earth pointing indicated at different positions. For communications with Earth, Venus Express uses either of its two High Gain Antennae (HGAe) depending on the Sun-Venus-Earth angle.

There are two points in the orbit where the Sun-Venus-Earth angle is 90°. Around these points, or more precisely, when the Sun-spacecraft-Earth angle is between 75° and 95°, Venus Express operations are in the quadrature phase.

Around the quadrature phase a swap is made between Venus Express's two HGAe, which is necessary to maintain the spacecraft's cold face pointed away from the Sun at all times. This is indicated in the figure with the 180° flip around the spacecraft Z-axis.