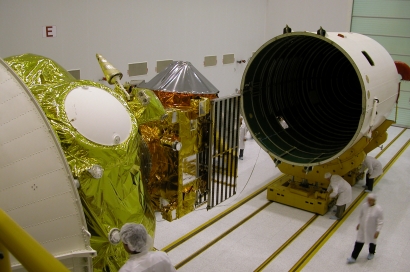 With the nose block fixed in horizontal position a couple of tasks had to be finished by the Spacecraft AIT team before the installation into the fairing could start. All "red tag items", such as the spacecraft's hoisting points, protective covers for the payloads, startrackers, solar array wings, had to be removed to get the spacecraft into its final flightready status. This was followed by the final visual inspection of the spacecraft to give the clearance for fairing installation, after which the spacecraft would not be physically accessible from the outside anymore.
View »
6-Feb-2023 19:00 UT