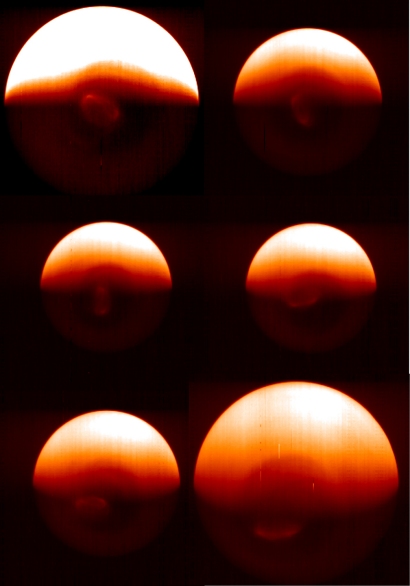 This composite image shows six false-colour infrared views of Venus as seen by the Ultraviolet/Visible/Near-Infrared spectrometer (VIRTIS) between 12 and 19 April 2006, during the highly elliptical capture orbit around the planet.

The images taken at 5 microns were obtained at six different time slots and at different distances from Venus (from left to right, top to botom):

The south polar vortex structure is visible from different view points close to the centre of each image.

The brighter regions in the images are from both solar radiation reflecting of the upper atmosphere (between ~60 and ~80 km altitude) and from thermal radiation originating in the lower atmosphere, just above the cloud top, located at about 60 kilometres altitude.