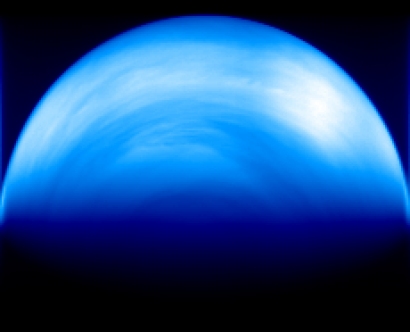 This ultraviolet image of Venus at 380 nanometres was taken by the Ultraviolet/Visible/Near-Infrared spectrometer (VIRTIS) on 19 April 2006, during the capture orbit around the planet, from a distance of about 190 000 kilometres. In the day side (top half) it is possible to see interesting atmospheric stripe-like structures. Spotted for the first time by Mariner 10 in the 1970s, they may be due to the presence of dust and aerosols in the atmosphere, but their true nature is still unexplained.
View »
28-Jan-2023 05:57 UT

From Earth to the Universe