Tracking Clouds over Venus's Night Side

Tracking Clouds over Venus's Night Side 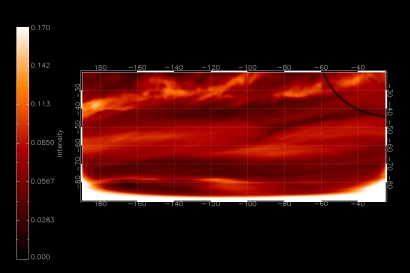 This spectacular night image is an infrared view taken at 1.7 microns by the Ultraviolet/Visible/Near-Infrared spectrometer (VIRTIS) on 12 April 2006, during Venus Express's first orbit around the planet - the capture orbit.

The image, covering a 160° wide strip between latitudes 20° and 90° south, shows clouds being clearly pushed by winds. Using a set of images of the same area acquired at different times, it is possible to make a direct measurement of the wind speed.