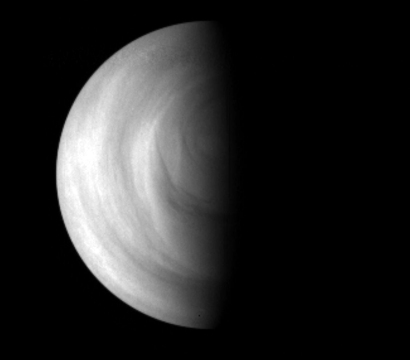 This ultraviolet image of the Venus southern hemisphere was taken by the Venus Monitoring Camera (VMC) on 15 May 2006, when Venus Express was flying at about 66 500 kilometres distance from the planet.

In this image, taken at 365 nanometres, the south pole is near the terminator, just above the centre of the image. The complex atmosphere that surrounds the planet is clearly visible. Near the pole, spiralling clouds are observed surrounding the polar vortex. Away from the pole we see cloud features of the upper cloud deck at approximately 70 kilometres altitude.