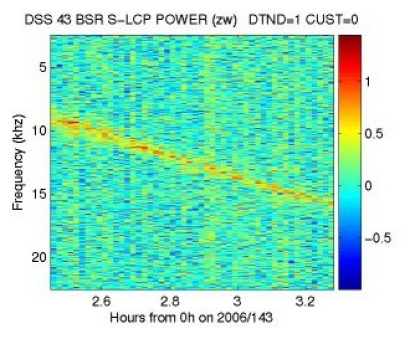 During the Bistatic Radar experiment the space probe sends a high-stable radio signal over the High Gain Antenna towards the surface of Venus, and the signal's echo is received and evaluated on Earth. On 23 May this experiment was accomplished for the first time with Venus Express, with the surface echo being received by the tracking station in Canberra (part of NASA's Deep Space Network) and recorded for more than 50 minutes.

The plot shows the radio spectrum around the transmitter frequency. The red line across the plot is the radar echo of Venus's surface. It is diagonally shifted, due to the Doppler effect.