Ground Based View of Venus

Ground Based View of Venus 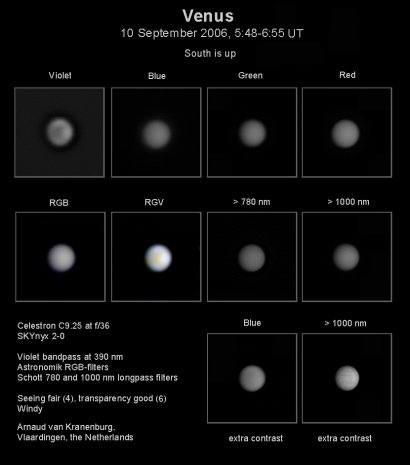 These views of Venus were obtained by Arnaud van Kranenburg on 10 September 2006, using a Celstron C9.25 telescope with a set of RGB filters (Astronomik) and a Violet bandpass filter at 390 nm, as well as two Schott longpass filters.

Seeing was worse than yesterday, although visually it was hard to distinguish. The Violet image is of poorer quality though. I was able to obtain an entire set of images at different wavelenths.

Venus is getting closer and closer to the Sun and I suspect these will be the last violet images I will be able to obtain before the conjuction.