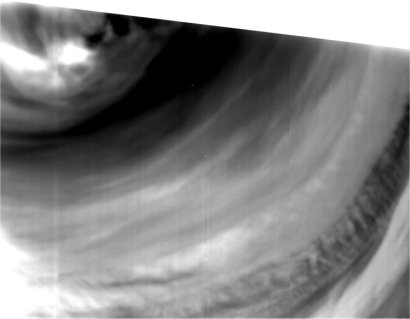 This night-side image of the southern hemisphere of Venus was taken by the Visible and Infrared Thermal Imaging Spectrometer (VIRTIS) on board Venus Express on 29 July 2006, from a distance of about 64 000 kilometres over the surface. At the time, Venus Express was around the orbit apocentre.

The image, taken at 1.7 μm, provides an example of cloud wave structure. Running from the bottom of the image to the top-right, each wave extends about 150 kilometres. This peculiar cloud feature is often seen at a latitude of about 55° S.

The picture also shows part of the polar vortex over the south pole at the top left. The region between the polar vortex and the wave structure contains the cold collar, a region in which the temperature of the clouds is lower than that of the surrounding area. This collar region stands out in the image taken in May 2006 (see related images).