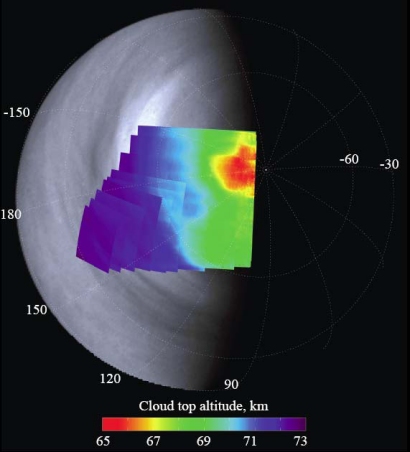 Composite image of Venus's southern hemisphere. The colour mosaic shows a map of the cloud top altitude, derived from VIRTIS spectral imaging in the 1.6 μm CO2 band, in which the relative depth is proportional to the cloud top pressure. The altitude map is plotted on top of a simultaneously captured VMC image that shows the cloud deck as seen in the narrow wavelength band around 0.365 μm (ultraviolet).

Titov et al. [2008] found the cloud top altitude to be constant at 72±1 km between latitudes 0°S and about 60°S. At latitudes south of 60°S the altitude of the cloud tops gradually decreases towards the pole and reaches 64 km in the eye of the polar vortex.

Venus Express unveils the cause of Venus' global cloud patterns