ESA Science & Technology - Surface warmth on a volcano on Venus

Surface warmth on a volcano on Venus

Surface warmth on a volcano on Venus 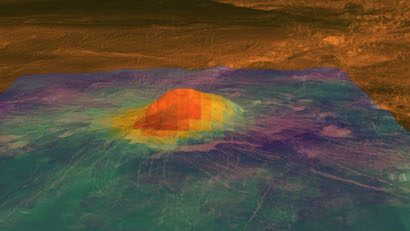 This figure shows the volcanic peak Idunn Mons (at 46 degrees south latitude, 214.5 degrees east longitude) in the Imdr Regio area of Venus. The topographic backbone derives from data obtained by NASA's Magellan spacecraft, with a vertical exaggeration of 30 times. Radar data (in brown) from Magellan has been draped on top of the topographic data. Bright areas are rough or have steep slopes. Dark areas are smooth.

The coloured overlay shows the heat patterns derived from surface brightness data collected by the Visible and InfraRed Thermal Imaging Spectrometer, aboard the European Space Agency's Venus Express spacecraft. Temperature variations due to topography were removed. The brightness signals the composition of the minerals that have been changed due to lava flow. Red-orange is the warmest area and purple is the coolest. The warmest area is centered on the summit, which stands about 2.5 kilometers (1.6 miles) above the plains, and the bright flows that originate there. Idunn Mons has a diameter of about 200 kilometers (120 miles).

The spectrometer data was collected from May 2006 to the end of 2007. See also the video featuring 360-degree views of the volcano that is based on the same data.