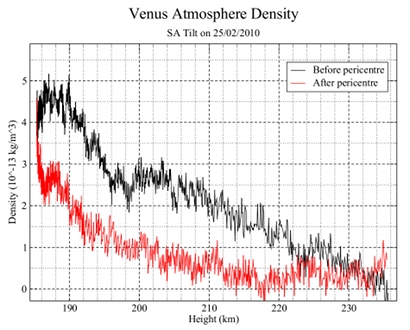 The graph shows the atmospheric density above Venus' North Pole as a function of altitude, in the range between 185–235 kilometres, as measured by Venus Express during torque experiments. The pericentre of the spacecraft's orbit, corresponding to about 185 kilometres, is at the far left of the x-axis.

The atmospheric density is estimated from the torque moment experienced by Venus Express, whereas the altitude is estimated by knowing the relationship between time and altitude in the spacecraft's orbit.

The black curve shows the measurements performed while the spacecraft is above the sunlit side of Venus approaching pericentre (incoming leg), and the red curve shows the measurements performed when the spacecraft is above the night side, after pericentre (outcoming leg). The incoming leg clearly exhibits a higher density.