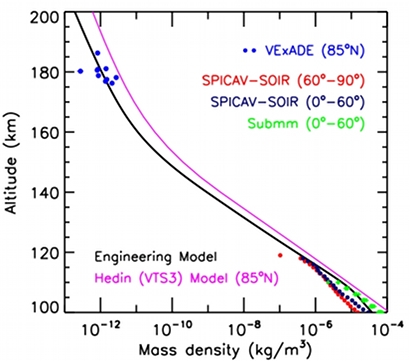 The graph shows the density of Venus' atmosphere in the region of the North Pole, at altitudes between 100 and 200 kilometres.

The blue dots are the new data from atmospheric drag campaigns of the Venus Express Atmospheric Drag Experiment (VExADE), and they represent in-situ measurements at an altitude of about 180 kilometres. The red and dark-blue dots are Venus Express remote sensing measurements performed with the SPICAV instrument, while the green crosses are ground-based sub-millimetre observations. All these data points measure the density up to an altitude of 120–140 km.

The magenta line shows the previous model (VTS3), developed by A.E. Hedin and collaborators in 1983 and based on density data collected by the Pioneer Venus Orbiter (PVO). The data contained information on the atmospheric density at Venus' equator only, and the model extrapolated the information to obtain global density estimates, including the polar regions. The VTS3 model relies on a simple symmetry assumption: the change in the solar zenith angle is the same moving from the day to the night side along a parallel or moving towards the North Pole along a meridian. The new measurements show that this assumption is not completely correct, as the VTS3 model predicts a density for the polar regions which is much higher than the measured value, and additional factors must be taken into account.

The black line shows a new engineering atmosphere model developed for ESA that provides a best fit to all the data.