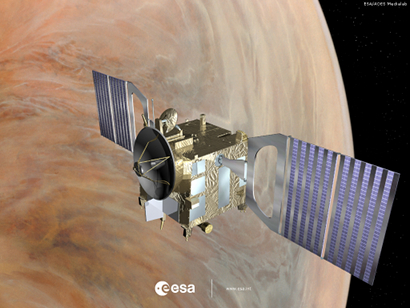 Venus Express has two solar cell panels per wing comprising alternating rows of standard triple junction solar cells as well as highly reflective mirrors to reduce the operating temperatures. There is twice as much sunlight in Venus's orbit as there is in Earth's orbit, plus additional thermal input from the Venusian surface and atmosphere - 75 per cent of sunlight being reflected up from it. In certain cases, this results in Venus Express receiving an equivalent of the thermal input from 3.5 Suns.
View »
1-Dec-2022 20:29 UT