The night side of Venus showing the ozone detections of SPICAV

The night side of Venus showing the ozone detections of SPICAV 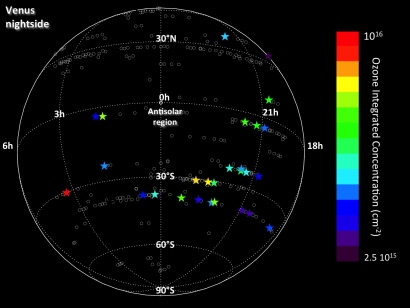 This image shows the night side of planet Venus and highlights the spots where the molecule ozone (O3) has been detected in the planet's atmosphere. The discovery relies on observations performed with the SPICAV instrument on board ESA's Venus Express.

According to the new data, ozone is located at varying altitudes in the Venusian atmosphere, between 90 and 120 km, and is always confined to a rather thin layer, measuring 5 to 10 km across. The ozone layer on Venus is very tenuous - up to a thousand times less dense than the ozone layer in the Earth's lower stratosphere.

The detection of ozone in Venus' atmosphere was achieved using the stellar occultation method. This technique allows astronomers to indirectly probe a planet's atmosphere by studying its influence on the light from distant stars. A drawback of the method, however, is that it relies on the availability of stars in the spacecraft's line of sight, meaning that it yields an uneven coverage of the planet and is limited to the night side. This means that investigations of the spatial or temporal distribution of ozone across the planet are not straightforward.

The lack of ozone at the anti-solar point could be explained if the molecules are destroyed by chlorine-based compounds, which are funnelled to the anti-solar point by the same mechanism that draws the oxygen there. The chlorine-catalysed destruction of ozone at Venus' anti-solar point may be caused by reactions very similar to those responsible for the Antarctic 'ozone hole' on Earth, highlighting once again the similarity of atmospheric processes on these two planets.