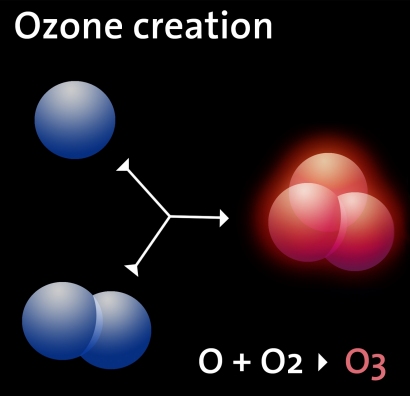 This illustration shows the chemical reaction that gives rise to ozone (O3) in planetary atmospheres with large abundance of molecular oxygen (O2). When irradiated by solar ultraviolet rays, oxygen molecules are broken into atoms (O), which may, in turn, react with other oxygen molecules and create ozone.

A dense layer of ozone is present in the Earth's stratosphere, at altitudes between 15 and 50 km. Traces of ozone were first detected in the early 1970s in the tenuous atmosphere of Mars. On Venus, ESA's Venus Express mission first reported evidence of a thin layer of ozone in the upper atmosphere of the planet, at altitudes between 90 and 120 km, in late 2011 (Montmessin et al. 2011). The ozone layer on Venus is very tenuous, up to a thousand times less dense than that on Earth, and was detected using the stellar occultation technique.