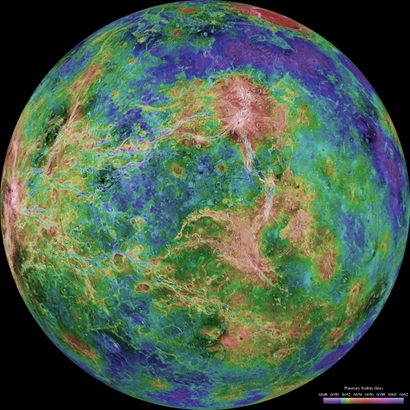 This map of the surface of Venus was created from observations accumulated during more than a decade of radar imaging of the planet. Observations made by NASA's Magellan spacecraft between 1990 and 1994 form the base of the image, with gaps in the data filled in by the Arecibo Observatory, which is based in Puerto Rico. The image is colour-coded to show elevation, using information gathered by the Magellan radar altimeter, with additional data provided by the Soviet Venera spacecraft and NASA’s Pioneer Venus missions.

Radar images of Venus have revealed geological structures on the planet, such as steep-sided domes and rugged highland terrain, which geologists think could feature mineral-rich materials, such as felsic rocks.

The discovery of felsic rocks on Venus would add support to the idea that the planet was once more Earth-like, as most of these materials on Earth formed in a water environment. However, other processes that don’t require the presence of water may also produce felsic rocks.