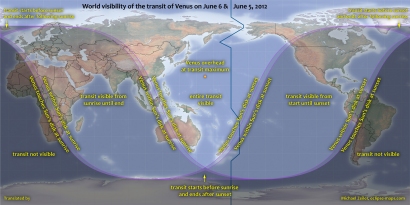 World visibility of the transit of Venus on 5-6 June 2012. Spitsbergen is an Artic island - part of the Svalbard archipelago in Norway - and one of the few places in Europe from which the entire transit is visible. For most of Europe, only the end of the transit event will be visible during sunrise on 6 June.

Get ready for the transit of Venus!