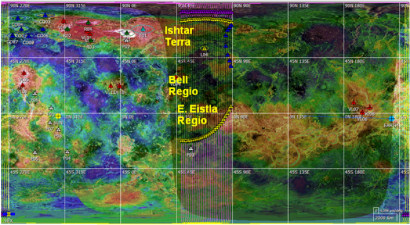 This figure shows coverage of Venus by orbital tracks during the reporting period from 4 March to 31 March 2012, during the 77th Medium Term Plan (MTP 77).

The position of the terminator, Earth and Sun indicated here correspond to the last orbit of the MTP. Purple triangles along the top indicate pericentre locations (on left, at the end of the ascending node) and those along the bottom show apocentre locations (on the right, at the end of the descending node). Yellow triangles denote the beginning and end of solar eclipses; blue triangles denote beginning and end of Earth occultation.

The surface targets during this period included Ishtar Terra in the Northern Hemisphere, as well as Bell Regio and Eastern Eistla Regio, which have been identified as 'hotspots', i.e. a surface manifestation of a mantle upwelling.