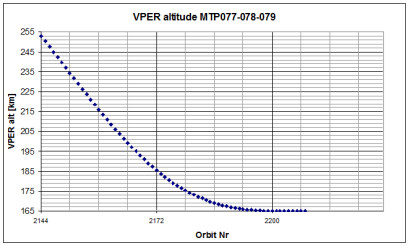 This plot shows the change in Venus Express's pericentre altitude (Y-axis) as the mission progresses, from Medium Term Plan 77 (3-31 March) to 79 (28 April to 26 May). The X-axis shows the orbit number; each orbit lasts 24 hours.

The pericentre plateau, where the low pericentre altitude is used for the atmospheric drag experiments, is clearly visible in the figure. After a series of drag measurements, the pericentre is raised by firing the main spacecraft engine.