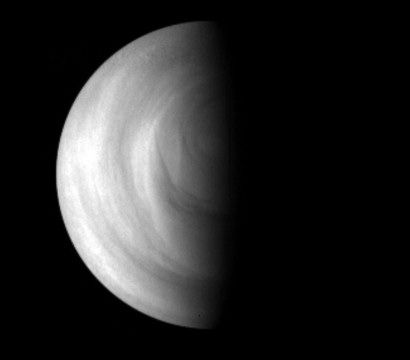 This image of the Venus southern hemisphere illustrates the terminator – the transitional region between the dayside (left) and nightside of the planet (right). The south pole is near the terminator, just above the centre of the image. The complex atmosphere that surrounds the planet is also clearly visible.

The image was taken at ultraviolet wavelengths by the Venus Monitoring Camera (VMC) on ESA's Venus Express spacecraft on 15 May 2006, when the spacecraft was flying at about 66 500 km distance from the planet.

A curious cold layer in the atmosphere of Venus