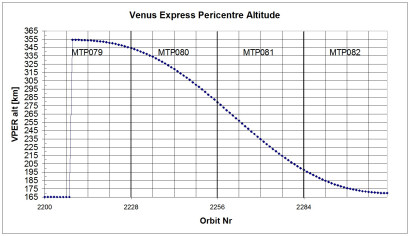 This plot shows the change in Venus Express's pericentre altitude (Y-axis) as the mission progresses, from 28 April to 18 August 2012 (MTP (medium term plan) #79 through MTP #82). The X-axis shows the orbit number; each orbit lasts 24 hours.