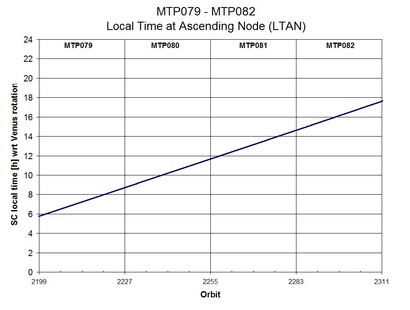 LTAN is the local time at which the spacecraft passes the Venusian equator on the ascending branch of its orbit. Values of 06:00 and 18:00 represent sunrise and sunset, respectively, and are on the terminator. LTAN values of 00:00 and 12:00 represent midnight and noon, respectively.

As on Earth, standard time zones are defined by geometrically subdividing Venus' spheroid into 24 wedge-shaped sections bordered by meridians, each 15° in longitude apart. The local time in neighbouring zones differs by one Venus hour, or 1/24th of a Venus day. The variation in the position of the Sun from one end of the zone to the other (East to West) would be 1/24th of its path on the sky.